One of the things that defines me is my love to create things. I think it’s a substitution in my brain for the fact that I will never have kids (I’m not willing to give up what would be needed to be a good parent and I’m not willing to be a bad one). Thus I create things that will live on past me as a testament to the fact that I was here. Model kits, AMVs, Woodworking, what have you; I love making things.

Thus, when a friend (we’ll call him Joe. Everyone else does) came to me with a big golden ! over his head (it’s an MMORPG thing) I was intrigued. He explained that he wanted to buy himself a Christmas present in the form of some permanent shelving for the front room of his house. At that point there were a bunch of black DVD shelving units that were lining the long wall and while they were functional, they didn’t add any value to the house. He was looking to have something that not only held more DVDs (way more. I mean, you can not believe how many more DVDs were laying around), but also allowed him to showcase his collection of figurines (of which he also had a healthy obsession).

So, we got together and he showed me what he had in mind and I talked with him about what I had in mind and we settled on a nice design that would line three walls (two of which were only about 1-3 feet long) and would set the stage for more shelves later. I began to get excited about the build because there were several aspects that would be a challenge, including a semi-hidden power strip, corner shelves that were not only recessed but could also be removed, shelves on the edge of the case with only two side walls (also, possibly, removable), lighting embedded in the shelves for both accent and functionality, and a set of Ethernet plugs so that they could run a network cable through the shelves to a computer in the other room. 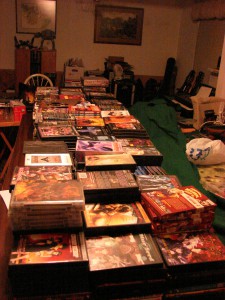 First up was the moving of the DVDs that were up against the wall and thus, in the way. These weren’t Joe’s DVDs, though. They were his roommate’s who we’ll call Woodchuck (yeah, the small furry marmot. You can’t always pick your nicknames). While Joe is the true Anime nut, Woodchuck’s collection of DVDs (which included Anime as well as regular movies/TV shows) was nothing to sneeze at. Having nowhere else to put them, we stacked up the DVDs on a long table that was in the  center of the room. In retrospect this might have been a bad idea as it was a little difficult to work around and even turning the ceiling fan on and off was tricky since you had to lean over the table to get to it (as the tallest person in the room it usually fell to me). 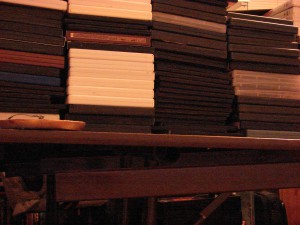 Also, the table that we put them on was only barely up to the task. The cross supports were weak and a couple of times the screws holding it to the table gave way dramatically. If you’ve ever seen those cartoons where the fat guy’s buttons pop under the strain and shoot across the room, you’ll know what I’m talking about. As we were finishing up we were worried that we’d have to redo the move from off of the floor to another table. And we were rapidly running out of room. The main reason why we were putting the DVDs where we were was that there was precious little space remaining (these shelves were needed bad). 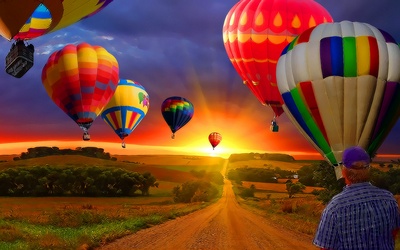